THE POPE TO CYCLISTS: SPORTS AS A SCHOOL OF LIFE 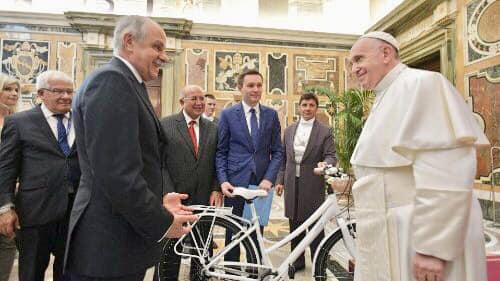 ROME. In welcoming the participants in the Annual Congress of the European Cycling Union, which welcomes the Assembly of the African Cycling Confederation, Pope Francis expressed his pleasure at this meeting. First of all, I would like to thank the words of Mr. David Lappartient, President of the International Cycling Union.

And he stressed that the relationship between the Church and sport has a long history that, over time, has been increasingly consolidated because sports can be of great help for human growth as it stimulates to give the best of himself , to reach a certain goal, and because it educates constancy, sacrifice and renunciation.

After referring, as an example, in the long and demanding training or in the observance of a demanding discipline of life, Francisco affirmed that the practice of a sport teaches us not to be discouraged and to start again with determination after a defeat or after of an injury. Hence, it often becomes an occasion to express with enthusiasm the joy of living and the satisfaction of having reached a goal.

Of cycling in particular, the Pope told them that it is one of the sports that highlights some virtues such as resistance to fatigue, in the long and difficult climbs; the courage; the integrity in the respect of the rules, the altruism and the sense of belonging to a team. In fact – he continued – if we think of one of the most widespread disciplines, road cycling, we see how during the races the whole team works together and often has to sacrifice for the captain. And when a partner goes through a difficult time, it is the other members of the team who support him and accompany him. And it drew a parallel with life, in which it is necessary to cultivate a spirit of altruism, generosity and community to help those who have fallen behind and need help to achieve a certain goal.

That is why he told them that many cyclists have been examples, both in sports and in life, for their integrity and coherence, giving the best of themselves while riding a bicycle. Yes, because in their careers they have managed to combine the strength of mind and determination to achieve victory, but also solidarity and the joy of living, as a testimony of having discovered the potential of the human being, created in the image and likeness of God , and the beauty of living in communion with others and with creation.

“The athletes – said the Holy Father – have this extraordinary opportunity to transmit to all, especially young people, the positive values ​​of life and the desire to spend it on high and noble goals.”

In addition, Francisco alluded to the importance for anyone who practices a sport to always know how to practice it in the service of the growth and integral fulfillment of the person.

While when, on the contrary, the sport becomes an end in itself and the person in a tool at the service of other interests, such as prestige or economic benefit, then “there are disorders – he said – that contaminate the sport”. And he directed his thinking to doping, dishonesty, disrespect for oneself and for adversaries or corruption itself.

Returning to the Church’s commitment to listen to young people, to take seriously their expectations, their ways of expressing their desire to live and fulfill themselves, the Pope told them that this is also true for them. And he reaffirmed the need to “accompany the new generations without losing sight of the healthy traditions and popular culture that, in many countries of the world, accompany cycling and its champions.”

When bidding farewell to these professional cyclists, the Pontiff wished them that during these days of meeting, they would accomplish a fruitful job and, while he asked them to pray for him, he blessed them from the heart. (vacannews.va)