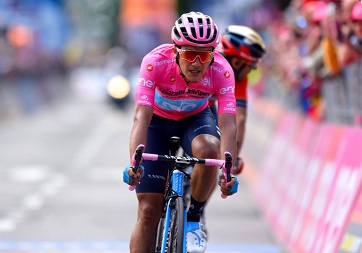 TULCÁN, ECUADOR. In the municipal velodrome of Tulcán, considered an Ecuadorian “cradle of cycling” and bordering Colombia, fifteen boys are trained to aspire to emulate their main reference, Richard Carapaz, who gives his school’s name.

Founded in late 2016 by the cyclist himself who is making history in the Giro and Italy, along with his friend and teammate Jorge Montenegro, who is the director, and his brother, Santiago Montenegro, the coach, the center emerged as a space for young boys could embrace cycling as their vocation.

“It was in a conversation we had with Richard when he saw that the authorities, both nationally and locally, did nothing to make the sport more massive and in a training session in 2016 we said, let’s make a school, let’s try to help”, explained Jorge Montenegro to Efe together to the track where students are prepared.

Dressed in their helmets, uniforms and professional bikes, the adolescent youth academics circulate following the instructions of the technician going up and down the inclined track of reinforced concrete and leaving the characteristic noise, similar to a flutter of flies.

The center instructs fifteen children between 8 and 16 years of age in the region, among them several cousins ​​of Carapaz, and to whom the cyclist usually motivates them personally to keep pedaling.

“Richard always speaks to them, he gives them their uniforms, helmets, sometimes trains with them and asks their dads to believe in them, to support them, that cycling can be a profession,” says the school’s director, insisting in which he does not make any decision without consulting the leader of the Giro.

When the school was still an idea, its promoters set a goal to find the young talent in the community of La Playa, in the parish of El Carmelo, which saw the birth of “the locomotive of Carchi” 26 years ago.

Jorge Montenegro has known Richard Carapaz for a decade when they trained together and their friendship narrowed when for the first time an Ecuadorian team traveled to Europe to compete in 2013 and “had the honor” of living with Richard for three months in the municipality of Dúrcal, in the province of Granada (southern Spain).

“It was an experience that linked us a lot because we went through very difficult things and they are experiences that marked each one of us in our lives and we carry them in our hearts,” recalls Montenegro, who wears a black T-shirt with the logo of the Richard Carapaz school with the which makes brand.

After knocking several doors of the main provincial entities of the Carchi, finally the sports center began to roll with the financing of 28,000 dollars that the Municipality granted to the own Richard, who signed an initial contract for a year, and thanks to which they could acquire training bikes, competition, jerseys and helmets.

The coach, with a degree in Physical Education and Sports in Cuba, began to prepare the children financed by the Sports Federation of Carchi, and in a short time the school paid off.

“In six months we already had national children champions,” in addition to the achievements of the most veteran young cyclists in the region, who travel daily on the steep roads of the area and paths that reach a height of between 3,000 and 4,000 meters above the sea level.

But the challenge remains the future, not only for the new Ecuadorian cycling quarry, but also in terms of equipment financing so that the boys can continue to train and compete for professionalization.

And it is that Montenegro recognizes that “although it is true that we have worked at the base, we have a good quarry, something that worries us is that if they become elite they will not have a team to go to”.

In this sense, it was pointed out that Richard Carapaz has in mind to set up his own professional team so that once they reach the age of majority, athletes can continue to work in a friendly environment and have a salary.

In parallel to the school of young talents, Richard follows closely the evolution of pupils like Alexander Cepeda, who is in a Colombian team and is a leader in the Vuelta a Antioquia; Jefferson Cepeda, who was Pan American champion and is in Italy where he is preparing with Caja Rural-Seguros RGA; and Joel Fuertes, a young promise signed by the Union Cycling Team of Monaco.

“Richard is very worried, he does not think only of him, he always took care of these three boys who are shining internationally,” said his former comrade-in-arms.

The also fellow cyclist Pablo Caicedo, with whom he used to run when he was part of the local team Coraje Carchense, underlines that “what Richard is doing is a wake-up call to the leaders to support the sport and show that in the Carchi there is cycling , talent and that guys come back who are very good. ” (EFE)