THE TOUR TO TÁCHIRA WILL HAVE TEN STAGES IN 2020 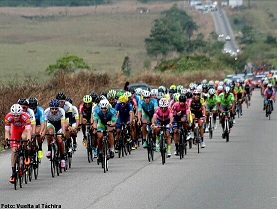 CARACAS. The president of the Venezuelan Cycling Federation, Eliezer Rojas, announced in a scoop through the radio program “Cycling Event” that the next edition of the Vuelta al Táchira, to be held from January 10 to 19, 2020, will have ten stages.

“The Vuelta al Táchira goes with ten stages. In these days I had a meeting with the Minister of Sports Pedro Infante and that topic was touched on, being positive about the ten stages. The minister and his team are working for the two stages in territory Colombian, “said Eliezer Rojas.

The top president of Colombian cycling also stressed that the Vuelta al Táchira is already “registered in the UCI calendar” and said he is “working together with the Association and the Tachirense media”.

Rojas also wanted to “inform about the nomination for the election of the best athletes of the year: Orluis Aular Road cyclist and Daniel Dhers runner of BMX Freestyle as amateur athletes and my candidate in third position as leader of the year. Thanks to our work we fulfill a 2019 calendar with a lot of seven international events, we carry out all the national competitions in spite of the situation in the country”. (EFE)