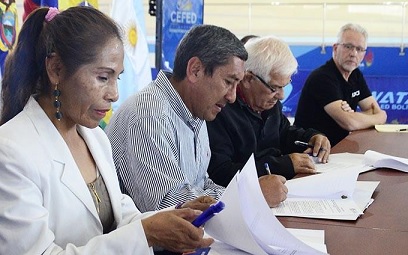 LA PAZ. “I think it has everything, I have not seen a track that has a villa like this, with the hotel, the sports center, a large airport (in the city). It’s the best I’ve seen in many places I’ve visited, “said Randy Shafer, the technician in charge of evaluations of the International Cycling Union (UCI), after his inspection of the velodrome at the Center for Training and Sports Training (Cefed) of La Tamborada

The approval is practically a fact because there are no observations by Shafer, who also noted that it can be level II by the number of spectators that houses the stage.

On the track that is held in Cochabamba, and that from September 2 to 9 will host the Pan-American Elite Cycling, Shafer said it is “one of the most magnificent tracks in South America.”

“I think that at this moment it is in level II for international competitions, because we have to put more space for competitions, such as world cups; but for the others it has all the facilities. Hotels, a very nice track and very fast, “he added.

The coach of the UCI confirmed that it is necessary that the stage has a capacity for 3 thousand spectators, to receive a World Cup.

In this regard, the Minister of Sports, Tito Montaño, said that while it is a yearning to host a Cycling World Cup, first the Pan American Elite category must be successfully organized.

“We always say that infrastructure is too big or, in some cases, very small. In the projection that we have, this scenario has been built for a thousand people, but there is the possibility to expand the capacity. That is depending on the need of the event, that is, if Bolivia would have the possibility of hosting a world championship, I think we would be able to expand this scenario, because the structure and conditions are given for that possibility, “he said.

Shafer explained that he, as an official of the UCI, is responsible for sending the final report on the inspection that was done to wait for the certification and the definition of the level that the track will have.

“Only the report I’m going to send to the UCI is missing, I think everything is fine. It’s perfect right now (down the track). I am going to send a report, the UCI needs to discuss what they think, but all things are very good, “said Shafer, after the respective measurements he made and saw the conditions in which the La Tamborada velodrome is located.

Yesterday, after the inspection, the Pan-American Cycling Confederation (Copaci), the Ministry of Sports and the Bolivian Federation of Cycling (FBC) signed an agreement for the realization of the Pan-American Elite.

In this sense, the event is confirmed for the month of September and it is expected that in the coming weeks the certification of homologation by the UCI will be made known. (lostiempos.com)