TOUR COLOMBIA 2.1: BOB JUNGELS SURPRISES IN MEDELLÍN AND IS THE NEW LEADER 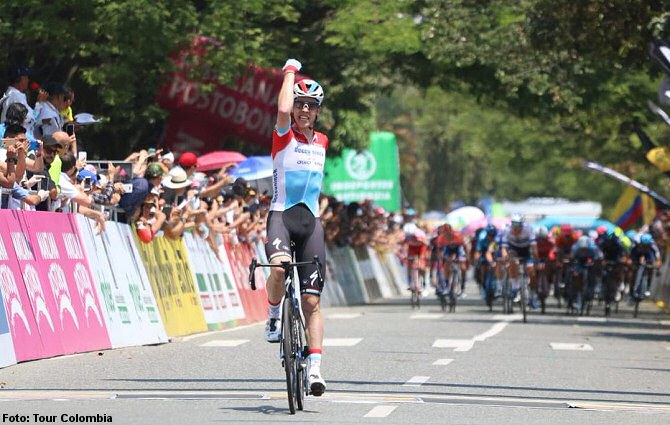 BOGOTÁ. The Luxembourgian cyclist Bob Jungels (Deceuninck-Quick Step) assaulted the leadership of the Tour Colombia 2.1 to get the victory in the fourth stage, a day of transition and 144 kilometers disputed this Friday with departure and arrival in the city of Medellin.

Jungels, the first Luxemburgish to win in Colombia, disarmed the sprint with an attack to 1,500 meters to finish reaching a solo victory that allowed him to scratch 3 seconds to the peloton, which, added to the 10 bonus, took him to the first place in the general ranking.

“I am happy for the team, it is an honor to wear this shirt,” said Jungels, while noting that he has how to defend the leadership in the mountain in the last two stages.

With today’s victory, for which he received blue jersey from the winner of the stage from the mayor of Medellín, Federico Gutiérrez, Deceuninck cyclist Quick Step took the leader’s orange shirt from Urán.

The fraction, a circuit of 144 kilometers in Medellin, had in its initial phase a leak of up to 2 minutes and 20 seconds that starred Miguel Ángel `Superman’ López (Astana), Juan Esteban Arango (Colombia Selection) and Miguel Rubiano (Coldeportes Zenú ), among others.

However, missing 10 kilometers to cross the finish line the peloton reached the cyclists of the escape, who did not enter the first positions of the stage.

On the other hand, Arango was the protagonist of the mountain this Friday to win two prizes, with which he was two points behind William Muñoz, leader of that classification with six units.

The overall classification is headed by Jungels with a time of 10 hours, 24 minutes and 13 seconds, followed by Alaphilippe two seconds and Martinez four.

The Tour Colombia 2.1 will continue this Saturday with the dispute of its fifth and penultimate stage, 172.2 kilometers with departure and arrival in La Union, municipality of the department of Valle del Cauca. (esciclismo.com)