TOUR OF PANAMA COMES TO GUARARÉ 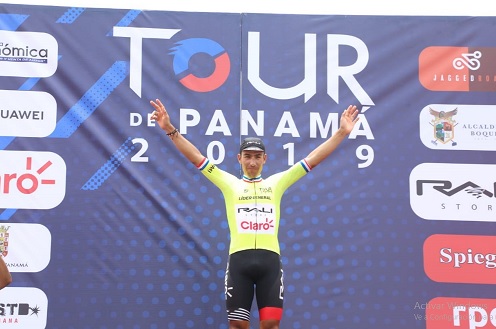 GUARARÉ, PANAMA. Carlos Samudio of the Rali Claro team with a time of two hours 10 minutes 38 seconds wins the third stage with a journey of 102 kilometers and an average speed of 46.1 kilometers per hour, a stage where the platoon remained compact during the entire tour of the stage that started from Spiegel de Santiago culminating on the road to the port of Guararé, the second place went to Carlos Brenes of the Total Chilsaca Eurobus team of Costa Rica and third place to Carlos Brenes of the same team.

The leader of the Regularity and Mountain Awards is Daniel Bonilla of the Total Chilsaca Eurobus team, in the flying goals section the leader is Leonardo Campos of the Total Chilsaca Eurobus. The Master B Leader jersey is for Onel Juárez del Aguadulce Cycling Team, the master leader A is for Mojamed Méndez of the Yared AMS Constructora Investments Team, the youth leader is Hernán Aguilar of the Omar de Pacora Caminos team, the Sub 23 Leader is for Franklin Archivold of the ININCO Team and as the Generala leader of the race, Albeiro Suasa of the Rali Claro team remains.

Tomorrow the fourth stage will be played with 126 kilometers of travel, starting from the Municipal Palace of Guararé, to Plaza Boulevard in Penonomé, three flying goals will be played the first in the Hotel Cubitá, the second in Weights and Dimensions of Currency and the third in Plaza On Go in Aguadulce. (Ruth Delgado / Aurelio Ortiz)