TOUR OF VALLE: JUAN PABLO DOTTI, THE WINNER OF THE 76th EDITION 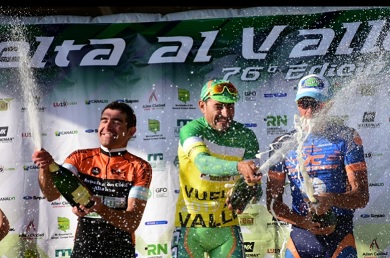 ALLEN, ARGENTINA. The Argentine champion Juan Pablo Dotti, who led the team of the Public Employees Union (SEP), of San Juan, reached his first victory in the 76th edition of the Tour of the Valley that ended in Allen after five stages that were exciting and summoned Many fans

Dotti, who was on the lookout at the beginning of the legendary test, appeared in all its dimension in the fourth stage that was fulfilled this morning, the time trial in which he made the difference.

The SEP leader won the stage and became the new leader of the general after beating Pablo Brun (Transport Martin) for 1 second.

He was relegated to third place Nicolás Traico (JC Competition), who was ahead in the general since he won the second stage.

The definition was for the fifth and final stage of 105 kilometers in the circuit called La Calesita, where 15 laps were fulfilled.

There was a group that escaped entry, first of five cyclists and at the close of eight, taking the victory Quilci (Martin Transport), who took the pleasure of winning a stage after an impeccable work in the test, surpassing Cristian Romero (JC Competition and Federico López (Shania).

Dotti entered the squad, who sealed the overall victory with a time of 12h 32m 43, beating Brun for 1 second. Third ended Traico. (rionegro.com.ar)