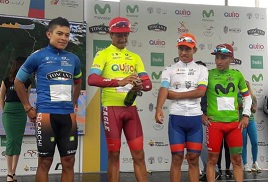 QUITO. The Ecuadorian cyclist Cristian Tobar won the fifth stage of the XXXVI Cycling Tour of Ecuador on Thursday during the circuit held in the Ecuadorian town of San Gabriel, in the province of Carchi, bordering Colombia.

Tobar timed 1 hour, 29 minutes and 6 seconds in the tightest dispute for first place, as in most stages, as the second place went to the Vuelta leader, Ecuadorian Jorge Montenegro, who timed the same time that Tobar, like the Ecuadorian Richard Huera, who placed third.

Outside, he remained expectant to also secure first place on Thursday, as happened on Wednesday when he won the fourth fraction, considered by cyclists as “the queen stage” for being the most complicated and extensive with a 150-kilometer course.

According to the Vice President of the Ecuadorian Cycling Federation (FEC), Juan Carlos Bosmediano, “this Thursday’s circuit became the one with the highest expectation so far in the Tour of Ecuador, which is reflected with the same time of the four first places”.

The leadership of the mountain awards was in the hands of Jorge Montenegro; in flying goals the Ecuadorian David Villarreal remains unsurpassed in the first place; U23 leader Richard Huera continues, while the one who stood out Thursday in combativity was the Ecuadorian Santiago Montenegro.

None of the stage winners have repeated victory and all have been left to Ecuadorians.

The sixth stage will also be played this Thursday with the circuit in the Ecuadorian town of El Ángel, also in the Andean province of Carchi, in northern Ecuador. (EFE)