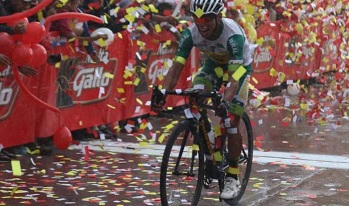 GUATEMALA CITY. The Guatemalan Alfredo Ajpacajá, current Vuelta champion, was left with the victory in the sixth stage of the Tour of Guatemala that ended in Totonicapán, while Manuel Rodas remained in the lead.

Both Decorabaños runners showed their high level before the attack of the Colombian riders in a 96-kilometer stage, where three mountain prizes and the same number of flying goals were played.

“I am happy with the triumph. I wanted to give this joy to my people and thank God I had the support of my team, ”said Ajpacajá at the end of the tour.

“It was a strong battle on the rise, but I thank God for giving me the strength to finish and win,” said the cyclist who defends the title of champion.

Alfredo Ajpacajá finished in first place with a time of 2 hours 54 minutes 14 seconds, followed by Mardoqueo Vásquez, from Cuajo Luna, and in third place the Colombian Yeisón Rincón entered.

The leader Manuel Rodas, from Decorabaños, came in eighth place six seconds behind his teammate Ajpacajá.

The Quetzalteco rider continues to lead with a time of 16 hours 43 minutes and 53 seconds, followed by his teammate and winner of the sixth stage at 23 seconds. Mardoqueo Vásquez, from Cuajo Luna, has a third place in the general, 30 minutes away.

The sixth stage, this Tuesday, October 29, will be a circuit in San Pedro Sacatepéquez San Marcos and San Marcos to complete a 116-kilometer course. (prensalibre.com)