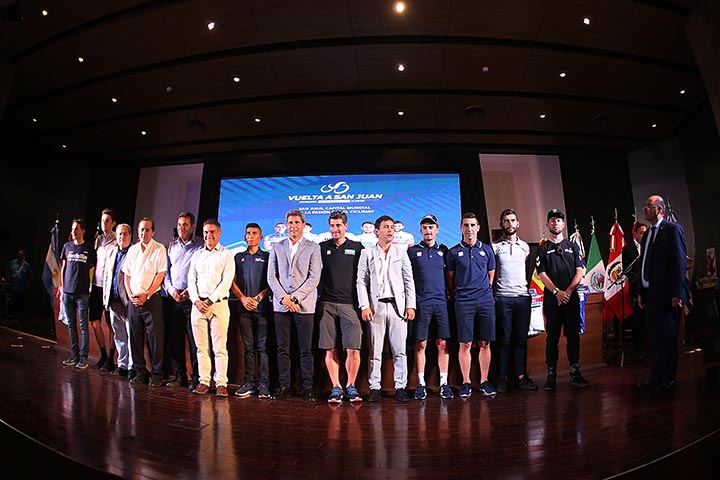 SAN JUAN, ARGENTINA. The Plaza del Bicentenario was the venue chosen for the official presentation of the 27 formations that will compete in the 37th Edition of the International Tour to San Juan. A crowd of cycling fans from different parts of the province, the country and the rest of the world applauded the passage of each of the delegations.

Started the party of cycling so expected by the fans with the official presentation of each of the squads that seek to be crowned in the sanjuanina round. The parade of the different teams from the building of the Civic Center to the Plaza del Bicentenario, passing through the brand new bridge of the Ignacio de la Roza Avenue, was cheered by more than 100 thousand spectators that they approached so as not to miss the show of the start of the UCI Tour
2.1.

The passage of the continental teams, the national teams and the World Tour to the central stage with the bicycles they will use in competition, was the attraction of the San Juan night that nobody wanted to miss. The UCI top-class riders such as Nairo Quintana (Movistar), Peter Sagan (Borahansgrohe), Julian Alaphilippe (Deceuninck – Quick Step), Jelle Wallays (Lotto Soudal), Fernando Gaviria (UAE) and Mark Cavendish (Dimension Data) , were the most anticipated by the followers of cycling, as well as the local teams that are protagonists of the route season in the province.

The artistic show with local music and the novelty of the high flying cyclists gave the framework to the party of all, accompanied by the presence of the Governor of San Juan, Sergio Uñac, the figure of the Secretary of State for Sports, Jorge Chica , the President of the FACPyR, Gabriel Curuchet and Juan Pacheco for the Pedal Club Olimpia, who received the riders and posed for the press photos before the fireworks that illuminated the night.

The show is more than guaranteed on Sunday 27 when starting at 15:45 the first stage will start moving from Plaza 25 de Mayo to Vallecito, to complete the 159.1 kilometers that end on Mendoza Street in front of the Maverick plant. (infobae.com)