VAN AVERMAET WINS FOR THE SECOND TIME IN MONTREAL 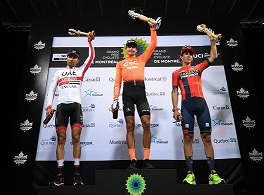 MONTREAL. The Belgian Greg van Avermaet, of the CCC team, won this Sunday for the second time in his career the Montreal Cycling Grand Prix by winning the sprint ahead of the Italian Diego Ulissi (UAS Team Emirates) and the Spaniard Iván García Cortina (Bahrain Merida) .

Van Avermaet, who won this test in 2016, was the fastest in the massive arrival with which the test was resolved after just over six hours and 219.6 kilometers of route with departure and finish in this Canadian city.

After finishing third Friday in the Grand Prix of Québec, in which the Australian Michael Matthews (Sunweb) prevailed, the 34-year-old Belgian, imposed his speed tip to add his fortieth victory as a professional and the third of the current course , in which he signed two stage victories in the Volta a la Comunidad Valenciana and in the Tour of Yorkshire.

The Frenchman Julian Alaphilippe (Deceuninck-Quickstep) was the great animator of the race in the final kilometers by being the pursuer of his compatriot Benoit Cosnefroy (AG2R La Mondiale), who led the test, and leave the last corner with a small gap about the group led by Jack Haig (Mitchelton-Scott).

Ulissi was in charge of ending the attempt of the two Frenchmen and threw himself for victory, but Van Avermaet came out in his wake and advanced him to snatch the victory.

Iván García Cortina, 23, looked for what would have been his second professional victory, but could not with the pedal stroke of the current Olympic road champion and Italian Diego Ulissi. (EFE)