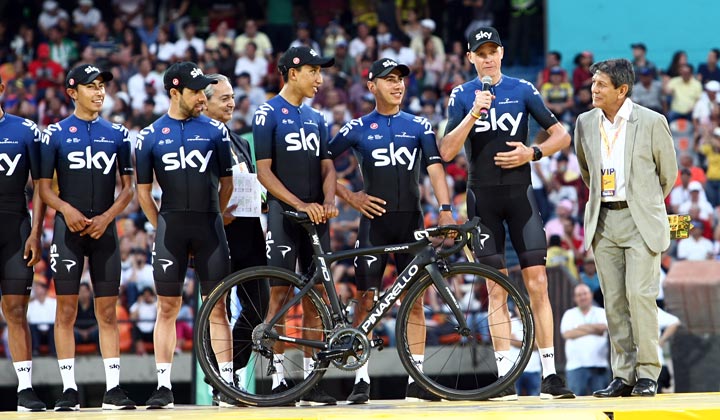 BOGOTÁ. With an unparalleled show at the Atanasio Girardot Stadium in the city of Medellin, the Colombia UCI 2.1 Tour was launched, a cyclist competition that starts this Tuesday with a team time trial in the capital of Antioquia, until next Sunday with an attractive arrival at the Alto de Las Palmas, will vibrate the emotions of Colombian fans with the main figures of the moment.

The event that was attended by a large number of spectators and of course the stellar artists of the world cycling concert; Nairo Quintana, Egan Bernal, Rigoberto Urán, Miguel Angel Lopez, Chris Froome, accompanied by the other 163 architects of the show that will decorate the roads of Antioquia for 6 days.

To this memorable encounter between the fans and the main protagonists of the show, the authorities of the Department were present as the Governor of Antioquia and the Mayor of Medellin, who were pleased with the initial reception of the audience. Those in charge of closing the Antioquia afternoon with a flourish were the Colombian artists Pipe Bueno and Pasabordo with their famous repertoires.

The runners, for their part, were pleased with the acceptance of the attendees and with respect to what they will live in the next 6 days indicated:

“We all want to win, it is not necessary to name the rivals, surely the ones we have here in Colombia will be the strongest, without demerit those from outside. The chrono is going to mark a lot the development of the race, we have to be very careful in the penultimate stage that is a lot of cheating, we will be very attentive for the day of the Palms which is a climb that I really like “added Nairo Quintana.

“We have worked very hard with private companies and the main authorities of Antioquia. The Tour Colombia UCI 2.1 shows our country to the world. Next year we will have 7 stages in Bogotá, Boyacá and Cundinamarca and we hope that this great event continues to grow, “affirmed the President of the Colombian Cycling Federation Jorge Ovidio González.

The first official pedalazo, will be given this Tuesday at 11 in the morning when the first team starts in the EPM Building to face the initial 14 kilometers that comprises the opening day. (mundociclistico.com)