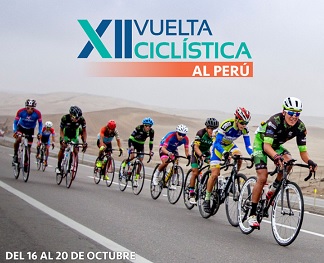 LIMA. Bolivian cyclist Juan Cotumba (Pio Rico) was awarded to the sprint the I Stage La Merced – Oxapampa – La Merced of the XII Cycling Tour of Peru, disputed today and organized by the Provincial Municipality of Lima, with a time without bonus of 3h 56 ’30 ”.

The Symbolic Departure was held in the Plaza de Armas of La Merced with the presence of the Provincial Mayor of Chanchamayo, Mr. Eduardo Mariño Arquiñigo and Mrs. Jenny Samanez on behalf of the Municipality of Lima. A Diploma was sent by Mayor Jorge Muñoz and also a Medal to the Mayor of Chanchamayo.

In Masters and Ladies, the group marched almost compact. At a calm pace without demanding much, studying each other as the legs responded.

The zizagueante road immersed in the green vegetation and with the Colorado River accompanying the side of the cyclists. A soft rain fell on the corridors in three sections of the route, cooling their actions a bit.

But the rain also caused the fall of some runners, which made them lose valuable minutes.

In the first leg, the Bolivian Juan Cotumba hit a strong start and escaped alone and arrived without companions at the entrance of Oxapampa, to win the Intermediate sprint.

In Master, Ronald Luza escaped and alone marked the pace of the race in his category. The Ecuadorian Daniel Roura, who debuted in the road race, pursued trying to minimize the difference. In Damas, the fight was even between the two HYF teams of Colombia, Yenifer Ducuara and Maria Gomez, who marched comfortably over the other participants.

Upon arrival, near the San Carlos Bridge in La Merced, Juan Cotumba and Alejandro Muñoz won the triumph of the sprint, defeating the Bolivian imposing his experience and cycling quality. Both timed 3h 56’30 ”. Third arrived Piurano Hugo Ruiz at 3’14 ”, leading a group of 7 cyclists.

In Peruvian Master Ronald Luza beat with 2h 25’15 ”. Second came the Ecuadorian Daniel Roura at 2’20 ”. Third was Huancaino Frank Raymundo at 3.51 ”. In Damas, the Colombian Yenifer Ducuara beat with 2h 36’33 ”, second ended her coequiper Maria Gomez at 0’12” and Tercera was the Peruvian Giselle Nieto at 8’59 ”. (APEJUC Communications Office)