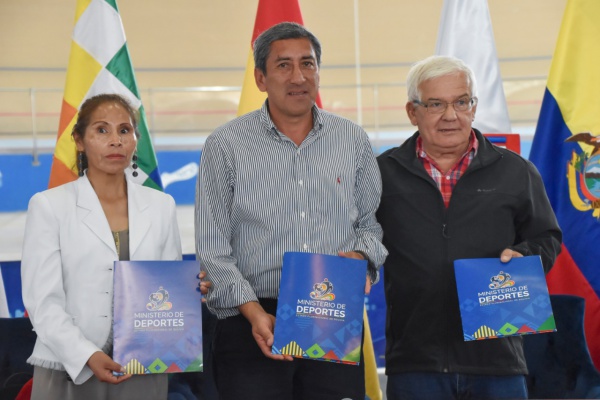 In the event, which took place at the Center for Training and Sports Training (Cefed) of Cochabamba, participated José Manuel Peláez, president of COPACI, Pedro Frías, general secretary of COPACI, Randy Shafer, technical director of the International Cycling Union (UCI), Tito Montaño, Minister of Sports, Marcelo Ortubé, Vice Minister of Sports, and Sonia Ramos, President of the Bolivian Cycling Federation, among other authorities.

The agreement establishes the technical, administrative and financial obligations of the organizers of the Pan-American Cycling Championship, and involves the COPACI, the UCI, the Bolivian Cycling Federation and the Sports Ministry. The organization must guarantee security, lodging, medical insurance, transportation and doping control tests, among other obligations. It was announced that the CEFED hotel in Cochabamba will host the delegations that arrive to be part of this international event.

“The velodrome was built for the South American Games, this installation has been one of the best facilities of our continent and from that moment of the South American Games we have programmed, along with President Evo and Minister Tito Montaño, the celebration of Pan-American events in this facility, “said José Manuel Peláez, president of COPACI.

For his part, the Minister of Sports stressed that “for the first time in the history of Bolivian sports” an event of this magnitude takes place. “Today thanks to the South American Games and the commitment of our government, then, we have the opportunity to enjoy these sports venues that are at the service of Bolivian sport,” said Tito Montaño.

Finally, the Minister of Sports, the president of the COPACI and the president of the Bolivian Cycling Federation reiterated the interest to organize, in the coming years, the world cup of this sport discipline in the modern facilities of the CEFED velodrome, suitable for this type of competitions.

The homologation of the velodrome track is sought

Randy Shafer, technical director of the UCI, was present at the signing of the agreement, since he arrived in Cochabamba to carry out the respective tests that allow homologation of the velodrome track, which was the scene of the 11th Cochabamba South American Games 2018, of the Pan American Cycling Youth 2018 and local and national events.

The homologation process before the UCI is a complex process that includes aspects associated with track measurements, inclination angles, material and others.

This velodrome is considered one of the best in South America. It is a modern sports infrastructure covered in its entirety, which houses the disciplines of track cycling and figure skating. The track has a length of 250 meters long, has a roof free of pillars in the competition area, the material of the track is made of kerto wood imported from Finland. It is presented as one of the most important, safe and fast in the American region; equipped with boxes, access ramps for bicycles, emergency exit, changing rooms, bathrooms, showers, heating area, press room, administrative offices, meeting rooms, storage rooms and a gallery for 900 people.

In addition, it has a presidential box, transmission booths and electronic timing system approved by the UCI. The central part of the warm-up zone is adapted for the practice of figure skating. It is an area of ​​regulatory competence, with a rigid floor of cement painted on the surface with epoxy paint. (UNICOM)