EGAN BERNAL CROWN WITH THE TOUR THE HISTORY OF COLOMBIAN CYCLING 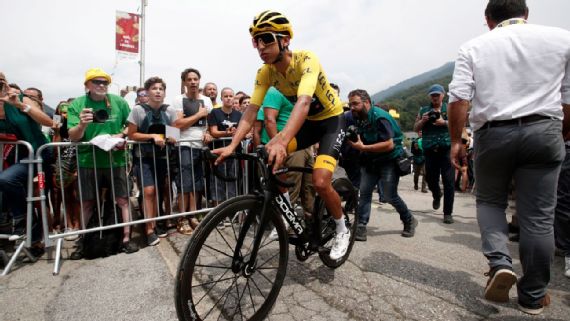 MADRID. The virtual triumph of Egan Bernal in the Tour de France, in the absence of the walk in Paris, was the piece that was missing from the cycling puzzle in Colombia, the only country where the sport is king and who only needed to win that title to complete the triple crown after those achieved in the Tour of Italy and the Tour of Spain.

Egan, the third youngest champion in the history of the Tour only behind Henri Cornet (1904) and Faber François (1909), thus returned to Colombia everything that the country had given to cycling and that had been close with the subtitles in the gala round of Nairo Quintana in 2013 and 2015 and of Rigoberto Urán in 2017.

The arrival of Bernal at Val Thorens, the highest ski resort in Europe and the last peak that cyclists climbed after three long weeks of racing, let out a cry that was contained since 1975, when Martín Emilio “Cochise” Rodríguez became the first Colombian to take the game in the gala round.

Since then, there have been 78 beetles that have wrapped the tricot and have traveled by bicycle recognized ports such as Alpe d’Huez, Croix De Fer, Mont Ventoux, Tourmalet and Galibier, where Nairo Quintana showed his caste and won his third stage in the last three years.

These cyclists are those who have represented the passion that there is for this sport in the country, where in cities like Bogotá and Medellín hundreds of people climb the mountains that surround them by bicycle.

The images of the groups of amateur cyclists abound on the main roads of Colombia, who wear the uniform and roll for hours regardless of whether it is sunny or rainy.

When beetles are in competition in Europe, as in the case of the Tour, office activities are paralyzed and people gather around televisions to support those who emulate their fondness for bicycles at the professional level.

With the recent successes of Colombian cycling, children now dream of becoming the new Nairo, Egan and Rigoberto, idols that many saw competing in the first two editions of the Tour Colombia, in which thousands of people went to the roads to enjoy of the elite riders.

Despite that passion, so far only three Colombian cyclists have managed to wear the yellow jersey: Víctor Hugo Peña, who wore it for three days in 2003; Fernando Gaviria, who won the first stage of the 2018 edition, and Bernal, the only one who will arrive with him in Paris.

There were also three other Colombian cyclists who got on the final podium: Fabio Parra, third in 1998, in addition to Quintana and Urán.

They have also excelled the climber Lucho Herrera – winner of three stages, one in 1984 and two in 1985 – and Santiago Botero, winner in three fractions and fourth in the general of the 2002 edition.

However, it was Bernal, a young man born 22 years ago in Bogotá but raised in the nearby town of Zipaquirá, who managed to break the barriers of Colombian cyclists and will arrive in Paris as the leader of the race.

For coach Luis Fernando Saldarriaga, former technical director of the missing Manzana Postobón team and Nairo’s first coach as a professional, the key to Egan’s triumph was in his preparation and the best example of this was the first place he took in the Tour of Switzerland .

“The Tour of Switzerland is a race of preparation-control and is very close to the Tour. It tells you what conditions you are in and that is why I think it came very well to the Tour,” Saldarriaga told Efe.

The coach also valued “the regularity” shown by Bernal in the race, because he believes there evidenced that the winner of the gala round is a “complete” runner.

“The regularity that he has shown has been key because although it is true that he did not have a good time – it was also so disastrous as to lose the Tour – he has been with the favorites in the other stages and he took a lot of confidence,” he added. 46 year old strategist.

That will lead, except catastrophe in the cobblestone of Paris, to Egan to carve his name on the plate of the great Colombian cyclists, who live in this decade a golden age in which Nairo’s victories in the Tour of Italy 2014 and in the Tour of Spain 2016.

“Colombia was missing an important thing and it was to win the Tour, because it had already won the Giro and the Tour … It is a historic moment,” said Saldarriaga.

The challenge for cycling in the country is to continue reaping great triumphs and for this it is key that Bernal can maintain the high level he has shown this season, as well as that Quintana can recover his best performance, because according to Saldarriaga, he still has the power and physiology to win. “

Beyond the great victories of the cyclists of the present Colombia, he lives with passion this sport that has allowed him to put the name of the country abroad. (EFE)