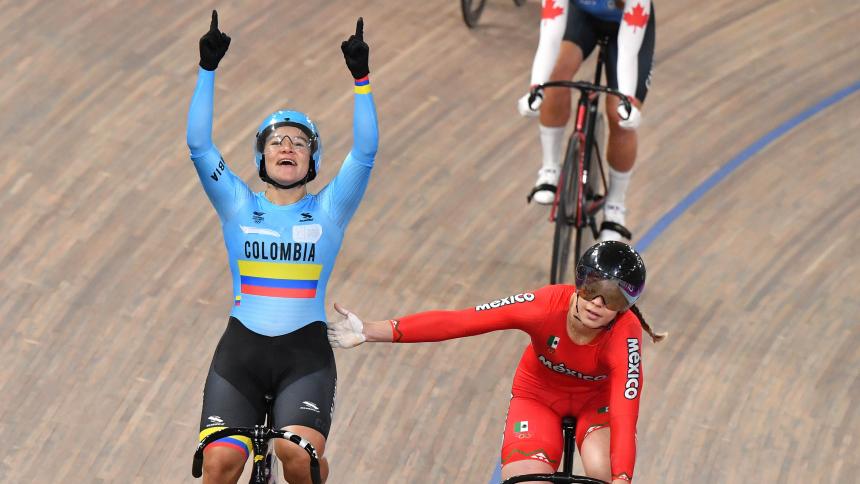 LIME. The Colombian Martha Bayona won on Friday the first gold medal for Colombia in the track cycling of the Pan American Games of Lima-2019 by winning the women’s keirin.

Bayona, who also hung the ninth global gold in these Games, was escorted by the Cuban Lisandra Guerra, who took the silver, and by the Mexican Paola Verdugo, deserving of the bronze.

“Today was my big day. I was very calm and confident. I ran with a lot of confidence. The test was very stressful, but I was aware of my rivals, I waited for my coach’s order and gave my best. I dreamed it and thank God I did it, “Bayona said after receiving the congratulations from the entire Colombian team and Ernesto Lucena, head of Coldeportes, the highest sports body in the country, by telephone.

The 23-year-old from Santander passed the finish line first after three laps in which she took the lead as soon as she reached the speed of 50 kilometers, after leaving in fourth position and calculating the ideal moment to attack.

“I am too happy and grateful to God, I dedicate it to all the people of Colombia who have supported me,” said Bayona, who won her second medal in Lima-2019 after winning bronze with the women’s speed team on Thursday.

Bayona could still sound the triplet on Saturday, when competing in the individual speed test.

“Yesterday we gave everything in the team test and today I wanted the gold medal. The last lap was very complicated. I almost had no legs, but I squeezed and gave it my all. Tomorrow I hope to do it very well too,” said the winner.

Guerra was about to recover the time lost in the final sprint, but in the end the Cuban yielded to Bayonne and settled for the silver ahead of the Mexican Verdugo.

“They came very well, I had a very bad leg pain, but I gave it my best to the line,” summed up Bayona, who did not compete in the previous Toronto-2015 Pan American Games.

Colombia already has four medals in track cycling in Lima, after the bronze of the men’s speed team on Thursday and the silver of the women’s team with Bayonne, which he repeated in Keirin on Friday.