MORENO CONDECORES ECUADORIAN CHAMPION OF THE TOUR OF ITALY 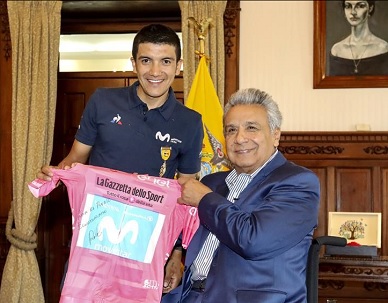 QUITO. The president of Ecuador, Lenin Moreno, awarded the National Order of Merit award in the Official Certificate to the Ecuadorian cyclist, Richard Carapaz, who on June 2 was crowned champion of the Giro de Italia 2019.

“Enormous example for Ecuador is @RichardCarapazM! Today the country is recognized with the Decoration to the National Order of Merit in the Officer’s Degree, which we hand it over in the name of the great pride it causes us,” the president wrote in his speech. twitter account.

“Keep reaping successes, champion!” Moreno added shortly after delivering the decoration to Carapaz at a meeting held at the Government Palace in Quito, the Presidency reported.

“The National Government recognizes as a sporting example of Ecuador @Richard CrapazM, for its magnificent performance in @giroditalia and its trajectory,” the Presidency on Twitter said.

The Ecuadorian president shared in the same social network a video of the meeting with Carapaz, who took advantage of the appointment to deliver to Moreno the pink “jersey” (T-shirt) of the Giro d’Italia.

The cyclist said that the “jersey” is a gift for the Ecuadorian people, to whom he dedicated the prize of the competition, which is one of the three most important cycling in the world, along with the Tour de France and the Tour of Spain.

“I wanted to dedicate it to all the Ecuadorian people that I’ve been able to get a smile, a tear, and that’s what I’m going to take forever as a reminder,” said Carapaz, 26.

The cyclist handed the pink “jersey” to Moreno and asked him to put it in a visible place in Carondelet Palace, the seat of government, so that visitors could see it.

The president responded affirmatively to the request of the athlete nicknamed the “Locomotora del Carchi”, since he is a native of that northern province known as the “capital of Ecuadorian cycling”.

Carapaz, who after the victory in the Giro d’Italia became the second Latin American runner to get the title, stressed that the “pink jersey” is the prize for effort, perseverance and dedication of a whole career. (xinhuanet.com)