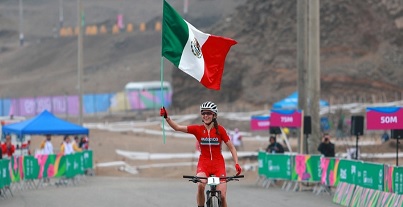 MEXICO. After a historic performance at the Lima 2019 Pan American Games, Mexican cycling will have one of its great challenges in 2020 to bring the Tokyo Olympics to competitors in the three reference modalities worldwide.

Therefore, the president of the Mexican Cycling Federation (FMC), Edgardo Hernández Chagoya, has defined a strategic plan to apply to national teams, including a camp in Japan, prior to the Olympic meeting.

“We have had a good year with outstanding results in the fair endorsed by the UCI as the World Cups, where the participants were among the best and that is good for the world rankings,” he said.

The manager mentioned that, in addition, one of the fair in which the results were met was in the Pan American Games, since three gold medals, three silver and the four bronzes were obtained.

“For us it is an important achievement that performance and tells us that things are done well and we are going for something historic in the Olympic Games,” he added.

Since 1975, national cycling had not obtained three gold metals in a Pan American event, and the first had been in the 100 kilometers with the team; the second and third were the work of Luis Rosendo Ramos on the individual route, in Caracas 83 and in Indianapolis 87.

“History has changed with this new generation of cyclists, since there have been two gold medals in mountain biking for a long time and now it has been achieved with two greats, such as Daniela Campuzano and Gerardo Ulloa,” he said.

But for the sports leader, the panorama must continue in the same direction, because you cannot stop and keep the past achievements, “but continue with the process because the World Cup is coming, where you must win the Olympic quotas”.

In January, Mexican cyclists will take part in the last stage of the World Cup series in Milton, Canada, and then see who will go to the World Cup in Berlin, Germany.

“We must take into account the pace of cyclists to go to the World Cup in Canada and then to the World Cup, an event that is important, because it will go through the Olympic squares.”

He added that cycling both on the track and on the road and in the mountains have brought important results and in 2020 they will be the three modalities in which the hope of having a good performance in Tokyo 2020 is set.

The last and sixth stage of the World Cup serial is scheduled for January 24-26 in Milton, Canada; and the Track Cycling World Championship is scheduled from February 26 to March 1 in Berlin, Germany. (Notimex)