RICHARD CARAPAZ, A CHAMPION THAT KEEPS IN VILO TO ECUADOR 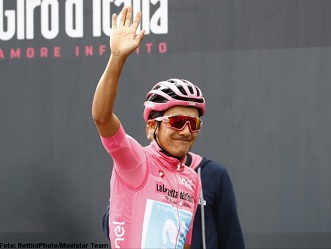 MADRID. The Ecuadorian cyclist Richard Carapaz (Movistar) has conquered with the pink jersey of the Giro d’Italia the heart of a whole country that looks forward to see him champion next Sunday after the final stage of Verona.

Politicians, journalists, athletes, but above all Ecuadorians on foot, celebrate these days the triumphs of their “national cyclist” in the Giro, and have praised their dedication and effort to crown him as their champion, regardless of what happens in the six remaining stages.

Born 25 years ago in the city of Tulcán, in the border province of Carchi, Carapaz already surprised Ecuador in 2018 by taking part in one of the stages of the same race for the first time, but this year it seems to start the heart of his compatriots after be on Saturday with the leadership.

“Fighter, obsessed and disciplined,” is how sports journalist Alberto Astudillo of the Teleamazonas television channel described it for Efe.

“Very few athletes in Ecuador have reached this level,” he added, emphasizing his “fighting soul” and preparation as a recipe for success.

The feats of the Carchense have won the generalized congratulations of the national political spectrum, and President Lenin Moreno described him as “great” after his triumph in stage 14.

“Thank you for giving us that joy and that pride, the country is celebrating and we will give it the recognition it deserves,” the president declared.

Carapaz arrived in Italy after winning the Tour of Asturias for the second consecutive year at the beginning of the month, which already awakened the desire for more victories in the Ecuadorians.

“For me it is an example to follow, be it of the discipline that is, but it is a precedent to be able to go ahead and look for our own goals”, indicated Efe Santiago García, a young man of 27 years dedicated to mixed martial arts.

For Oscar Salcedo from Quito, Carapaz is a “sports icon”, a true champion.

“It is a benchmark for people who ride a bicycle,” said Carlos Armijos about the so-called `Locomotora del Carchi’.

With or without “pink jersey” in Verona, for the Ecuadorians Carapaz is already the champion. (esciclismo.com)