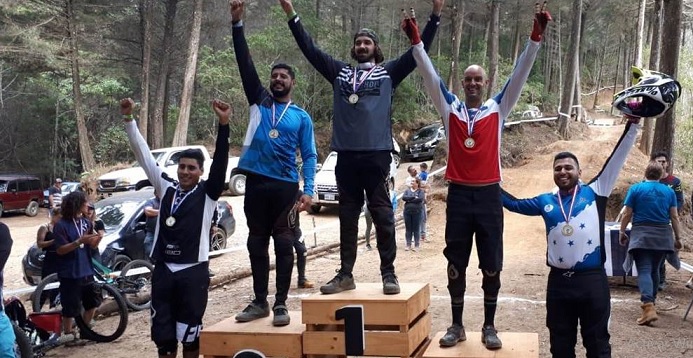 SAN JOSE. The track “El Cabuyal”, located in the La Lucha farm, was the venue for the first date of the Central American Downhill Open, where the winner was the Costa Rican Roberto Castillo who defeated Guatemalan Marvin Spiegler for a little over a second. Elite category.

The time of the tico was 2: 57.445 while the chapín Marvin Spiegler closed with 2: 58.788, the third place was for the veteran Carlos Castillo of Costa Rica, the fourth for Jhonny Flores of Costa Rica while the fifth was Angel Ochoa of Honduras .

The story of the Central American final held on March 24 in Guatemala City was repeated at Finca La Lucha, when at that time, Roberto Castillo defeated just 2 thousandths the current Guatemalan champion Marvin Spiegler in a descent of heart attack.

This Sunday, 60 competitors from Costa Rica, Guatemala and Honduras arrived in “El Cabuyal” distributed in 10 categories.

In the Master A category, the winner was Juan Carlos Linares from Guatemala, in Mater B José Morales from Costa Rica, in Cadette he won Jesús Gamboa from Costa Rica.

One of the most surprising in this Open in the Lucha farm, was the excellent career of the young Costa Rican Pablo Aguilar who at age 18 was the seventh fastest time with 3: 10,086, descending as if he were an elite.

The track extends 2 kilometers downhill between a cabuya plantation, hence its name. The exit is located at a height of 2,100 meters with a goal of 1,500 meters with descents where a fifth of the route is new, very technical as well as steep with the endorsement of the Class 2 international certified by an UCI Commissioner from Canada.

The track “El Cabuyal” is one of the best in Central America where in the end the national championships are held and in the future it will be the venue of a Pan American Championship for its conditions.

“The Central American Cup is a regional effort to promote the sport with the support of the Federations of the countries of the area. We hope that the 2020 Cup will also be endorsed by the COPACI, Pan-American Cycling Confederation, “said Giovanni Castillo, President of the Costa Rican Downhill Association.

The Central American Downhill Cup consists of 4 dates. The second will be held on July 21 in Honduras, the third on September 15 in Nicaragua and the final on November 24 in El Salvador. (teletica.com)