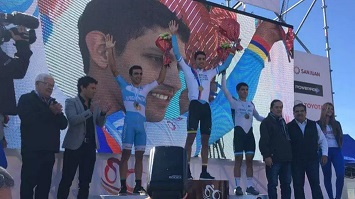 BOGOTÁ. From May 1 to May 5, 12 cyclists of the elite categories, men, women and sub 23, will be representing the Colombia Manzana Postobón team in the Pan-American Championship that will take place in Pachuca, capital of the state of Hidalgo, located north of Mexico City at 2400 meters above sea level.

The team led by Carlos Mario Jaramillo will face the continental appointment with a group of young talents among which stands out the presence of Paula Andrea Patiño, who has a remarkable season in Europe under the baton of the Movistar Team.

Walter Vargas will defend the title in the time trial specialty obtained in Argentina, while his teammate Harold Tejada, national champion of route and CRI, appears as one of the main cards in the sub-23 category.

Yeison Reyes and Brandon Rivera (GW Shimano); Julián Molano and Alexis Camacho (Zenú Coldeportes); and Santiago Ordóñez (EPM) will wear for the first time the colors of the route selection in international events. Jhon Anderson Rodríguez (EPM) will make his debut in an elite team after completing his processes in sub-23. The caldense, winner of the queen stage of the Vuelta al Tolima, is one of the most regular runners in the country at the start of the season.

The official calendar of competitions will open on May 1 with the dispute of individual time trials.

On May 2 the development of the UCI Exchange Platform, also known as Charing, is planned, which will be led by the president of the International Cycling Union, David Lappartient, who together with José Manuel ‘Pepe’ Peláez, president of COPACI, will command the Congress with the representatives of the Federations the next day.

On May 3, 4 and 5, the 34th edition of the Pan American Championship will culminate. (Fedeciclismo Colombia)