TOUR OF COLOMBIA: SEBASTIÁN MOLANO IS IMPOSED ON THE THIRD, RIGOBERTÓ URÁN RECOVERS THE LEADERSHIP 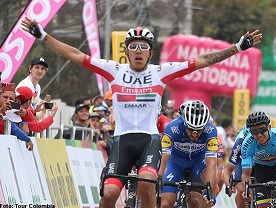 BOGOTÁ. Colombian rider Rigoberto Urán, of the EF Educartion First team, regained the leadership of the Tour Colombia 2.1 on Thursday at the end of the third stage, held in Llanogrande, in a rural area of ​​Rionegro, department of Antioquia, which won the sprinter Juan Sebastián Molano (UAE Emirates).

Molano, who follows in the footsteps of his countrymen Fernando Gaviria (UAE Emirates) and Álvaro Hodeg (Deceuninck-Quick Step), stopped the clock in 3 hours, 42 minutes and 52 seconds for 167.7 kilometers.

Molano was “very happy for the first victory with the new team.” “With the absence of Gaviria, the team gave me the opportunity and I wanted to take advantage of it,” he added.

Urán, who regained the lead, totals 7 hours 19 minutes and 37 seconds, is tied in time with his teammates Daniel Martínez and Lawson Craaddock.

“This shirt (the leader of the general) I want to dedicate to my whole family, you are all my family, you are loved, thank you for that affection, a big hug,” Urán said.

The fourth place of the individual general is occupied by Alaphilippe, who gives 2 seconds, while Egan Bernal (Sky), is fifth to 8 seconds.

Hodeg, who started the day as the leader, lost the wheel of the main peloton in the last 25 kilometers and now concentrates his work in seeking another victory in a flat stage.

The most exciting moments were experienced from there, in the final stretch, when the runners faced the climb to the Alto Nano, a third category mountain prize.

There tried to draw differences runners like the Ecuadorian Richard Carapaz (Movistar) and the same Alaphilippe, but their efforts did not bear fruit because of the work of those interested in joining the runners and leaving their packers for the dispute of the stage, as it happened .

The Tour Colombia 2.1 will continue this Friday with the dispute of its fourth stage, of 144 kilometers with departure and arrival in Medellin. (esciclismo.com)